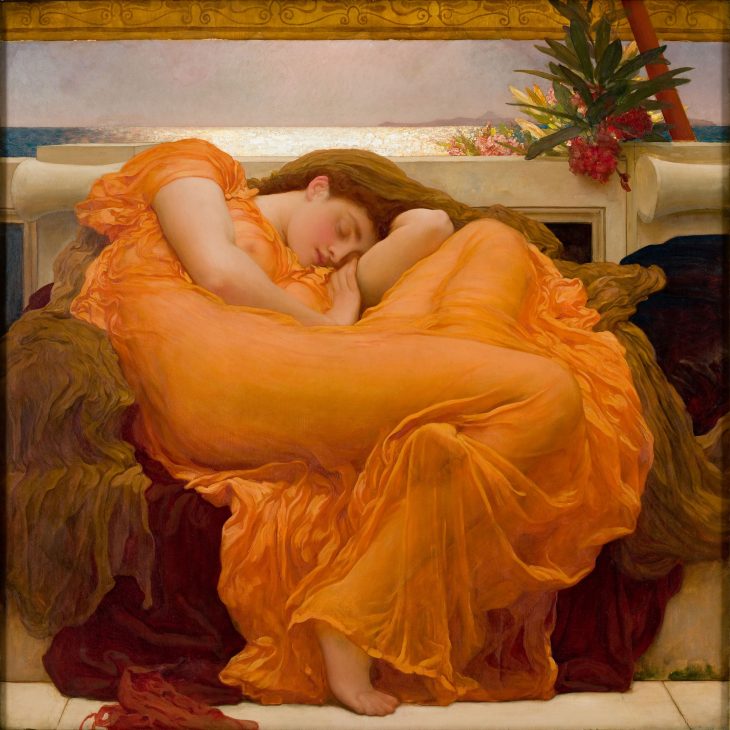 Fundamental Paintings to Understand the History of Painting

Flaming June is the masterpiece of Frederic Leighton, one of the most representative painters of the Victorian era.

Victorian painting developed in Great Britain during the reign of Queen Victoria I (1837 – 1901). Industrial Revolution, Imperialism and rigidity in traditional social class structure: a proud, rich, arrogant and eccentric dominant class surrounded by misery and slavery.

That strict, materialistic, grey, reality generated a reaction in art: many artists started to produce imaginative, colorful works that longed for the past and were away from that reality.

With the arrival of the avant-garde movements and modernity, Victorian painting was disregarded during decades. Ignored. We may say that it was considered as a minor, decorative art in comparison with those new tendencies that were changing everything and started to represent the inner world of the artist, instead of the outer world.

That style of painting resulted somewhat superficial for the ambitions of modernity. And a confirmation of that is that this work was auctioned in the 60s and not even its base was offered (140 dollars, a ridiculous figure).

Fortunately, the history of art made justice. The style has been redeemed, and today we are no longer “embarrassed” if we think that this is one of the most beautiful paintings that has ever existed.

Fundamental Paintings to Understand the History of Painting: The Kiss, Gustav Klimt.

The touch of Frederic Leighton.

The Touch of Egon Schiele.

Alfons Mucha, the Perfect Example of Art Nouveau (or Modernism).

Fernand Léger Fundamental Paintings to Understand the History of Painting We could make this publication thanks to small donations. How is 3 minutos de arte supported?    Two Women Holding Flowers (1954). Fernand Léger Oil on Read more…

Giuseppe Arcimboldo Fundamental Paintings to Understand the History of Painting We could make this publication thanks to small donations. How is 3 minutos de arte supported?    Autumn (1573). Giuseppe Arcimboldo Oil on canvas. 76 cm Read more…